Some people will argue that the middle age crisis can impact anyone, although the effects of this problem vary in intensity from person to person. For some people, it will involve buying the latest sports car, while for others it will be merely taking the dog for a walk more often. 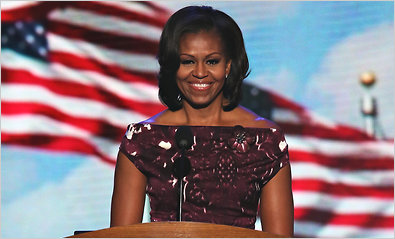 In the case of First Lady Michelle Obama, it appears she falls into the category of the latter. In numerous interviews she has claimed that her high-profile lifestyle means that she is satisfied by the simple things in life – although she has always maintained that she has never feared age. Considering the fact that it is usually this fear that sparks a middle aged crisis in many people, this is probably the reason why she is so calm about her age.

Something else that Obama maintains keeps her going is the sight of her older friends and family. Take her mother for example – at 75-years-old many would be under the impression that such a woman would leave a relatively steady lifestyle. Instead, Michelle states that she is hugely active and is a massive inspiration to her, just like a lot of other older people who act in a similar way.

On the subject of inspiration, let’s not forget that Obama herself is an inspiration to many. Her status as one of the most powerful women of the world means that she is constantly the target of criticism, unfair or not, and some people in the same position would not act favourably. Instead of being tempted into following the middle age crisis route, Obama remains composed and has taken a hugely positive view on life. Admittedly, some people will always speculate that politics are behind her optimistic approach, although most are under the impression that she is completely genuine when she talks about how she is dealing with this element of her life.

Taking the above into account, here are three issues that Michelle Obama has cited as beneficial for her body in the past:

It has to be said that Obama hasn’t really spoken about her yoga in great detail, although she has confirmed in several interviewers that it is something that has helped her during this period of her life. Considering the fact that Obama is viewed as a woman possessing an excellent shape in view of her age, one has to assume that this form of exercise is quite high in her list of priorities.

Perhaps strangely, a colostomy is something that Obama has spoken more about. While some may shy away from quite a sensitive subject, she was very open during a recent interview with Dr Oz and claimed that she proceeded with the treatment at 48-years-old. This appeared to surprise Dr Oz, who seemed to think that most people have the procedure when they are over 50. Obama responded by saying that her team of medics was adamant that she should have the colostomy done sooner rather than later and appeared to preach the procedure to any women in a similar position.

Suffice to say, a good diet was also at the top of Obama’s priorities. The First Lady has talked plenty about this and it appears her food consumption is one of her most crucial issues in her life. Of course, many people won’t be at all surprised by such revelations, as she has been one of the key backers in the recent initiative to encourage school children to eat healthier meals. One can only assume that this healthy approach is one of the main reasons why Obama doesn’t only look great, but freely admits that she feels fantastic as well.

In summary, it is clear that Michelle Obama takes great pride in her current physical state. However, it is also clear that she places great attention on exercise, diet and other health-related issues, in order to avoid the dreaded midlife crisis that so many women of her age experience.